My goals are to:

“…I generally keep my subliminal stack incredibly tight and focused.”

After I read this I decided to refocus my stack. It is down to Emperor and Primal in the room where I sleep and in three rooms I am in less often + Emperor, Primal and Limitless in my office at work. I am thinking that maybe Limitless could be pared as it is already in Emperor but I like the qualities it is intended to develop so it is staying right now.

I have decided to avoid all stack modules and stick only to as few major programs as possible at a time to maximize listening time.

Of course I am also putting in 3 to 5 cycles of “Libertine” per day and will alternate that with “Beyond Limitless” once it arrives.

@SaintSovereign and others. I am really loving Limitless because it really motivates me to learn and makes it easier for me to grasp stuff.

I am curious though did you experience stuff like “subconscious book reading” yourself, since you have been running it for a while.

I am curious though did you experience stuff like “subconscious book reading” yourself, since you have been running it for a while.

It’s hard to say. Despite the fact that subconscious is infinitely more powerful than the conscious mind (and seems have a direct connection to the quantum part of our reality), we still have to deal with the limitations of the physical world. I have had some weird things happen, where I seem to understand the book material and know where it’s going before it gets there – the times when that happen, I have attributed it to “subconscious book reading” and the other related modules.

Wanted to talk a bit about goal setting and how it improves the effectiveness of subliminals.

Goal setting is both a science and an art, and its amazing how setting strong goals affects the psyche. Once upon a time, I used to email lots of millionaires and pay them a small sum of money if they’d answer a short question. Most of them responded positively, especially since I offered to pay for their knowledge rather than just taking. Anyway, one of the questions I asked was: “What’s the number one habit I needed to develop to build TRUE wealth?”

And one of those individuals hit me with a profound answer: What exactly are you calling “true” wealth? He didn’t mean that in some sort of esoteric way either. He wanted me to break “true wealth” down into bite sized goals that I could put on a checklist, then work to achieve.

This example is still too broad. From there, I need to create income goals by quarter, and the sub goals needed to reach them.

This way, each time you hit a goal, you reinforce success based subliminal programming. It becomes more and more “real.” Eventually, success is the only reality you know.

Earlier, I asked what your 2019 goals were. Take a look at them again, how can you break them down?

I’m finding myself increasingly frustrated when I get support requests because the user claims they’re “not seeing results.” But then, upon further investigation, they’ll tell you that they did notice increased attraction, or had unexplainable vivid dreams, or a moment at work when they we’re uncharacteristically dominant in the face of injustice, etc. Then, they’ll proceed to express skepticism that the sub made them do it.

Well, you’re right, the sub didn’t make you do it — you did, and that’s the point.

Subliminals don’t make you do anything, they simply provide alternative subconscious programming to help you surpass past issues. You still must take action, significant action, to succeed.

I run a modified version of Emperor. It’s probably vastly more powerful than anything we’ve released because it’s hand tailored to my needs. I spend no less than 8 hours a day on online business, and in six months, I’ve exponentially increased revenue and profit. I’m projecting that I could be a full time entrepreneur by years end. But that will not come to pass if I just run the subliminal, do nothing and “wait for results.”

If you’re feeling euphoric, sensing energy flows, having vivid dreams, the subliminal is doing its job in delivering new ideas to your subconscious. But, for those ideas to become real, you must take action to solidify them.

I write this as a reply to Saint, but it’s actually towards everyone, just in a way adding to what Saint said.

This is a physical universe, it’s a physical actions that move and change your life. You can’t just think of something and get it. You have to physically move and move in a way that attributes the intent you have. Even if you do some physical action symbolically, as long as it’s moving you in the direction of intention, it’s working.

This is what magick is for those who practice it. It’s like a permission slip to go for what you want. Any action or a series of actions that can be described as rituals (whether it be certain belief change with change technique using NLP or hypnosis, making a wish in wishing well, listening to subliminal, or is it some drastic occult practice that in face of normal society would be ending someone in jail for life) makes you believe everything will turn out the way you want and therefore you go and do it. Otherwise, nothing changes.

Subliminals are not a coward’s way out. They might urge you to do things, and they will make you more interested in doing those things, but you will have to do them yourself. You will just have that extra help in the back of your mind that things are changing and for the better of you. As long as you listen to subliminal, take an approach of assuming ‘‘I can do everything I want’’ and use subliminal as your permission slip to do them, somewhere in the process you will notably see them kicking in.

Edit: Process of (1) action with process of (2) listening to subliminal turns into progress.

In my opinion people don’t take action, because they are afraid. And since taking action is so necessary for subliminals to work then it follows that any subliminal that doesn’t primarily address this issue of fear would be quite limited in use.

Great, now I don’t have to repeat myself over and over anymore.

Using Subliminals or what-ever and not taking action consistent, is just another self-help escapism.

Self-help can become just as escapism as emotions, drugs, food, gaming, pretty much everything that takes your mind of that thing you don’t want to face.

I agree, but that’s kind of beside the point. The question remains - how do you help people who are too fearful to take action? And instead escape by the means you listed for example. I thought subliminals had the power to reframe those fears and greatly help their users to start taking action.

Most of the time it’s not fear, but a lack of clear vision (literally, images in their minds). People’s goals are so… abstract, they don’t have a specific action to add to what they want and they don’t know what is their end goal. And in here lies the thing that subconscious is completely dumbfounded of… what do you want?

When it’s small and specific action, fear subsides. When it’s abstract, undefined, this is where most of fears come from.

Of course, there are more things in what you mean and the other parts is to work with yourself in any possible way to get yourself working. Taking action. Even at least symbolically. Moving slowly towards your goal does not mean making a million dollar business tomorrow and negotiate selling it for 7 figures, but you can create a list of goals and read a business success story and note what a person did, what was the business and how he built it.

That is already a physical action.

Edit: I am writing too much, I think. What I mean is - fear is too often then not a result of not having a direct and actionable plan. It’s hard to be afraid of thing you know is doable, but a thing you don’t know how to do or what the result looks like is terrifying in your minds eye (literally, image scares you).

Thanks for your response.

I can imagine being afraid not of writing an email itself, but of what the person receiving it might think of me.

Or I can be afraid of becoming a millionaire if my current identity is too strongly tied to my current life circumstances.

We’re talking about limiting beliefs here and their main modus operandi is creating fear if we try to go against them.

That’s what I think at least.

The best process I can tell you, is to get small victories over yourself and expanding your comfort zone bit by bit… this in conjunction with a system to catch/process emotions/limiting beliefs.

READ fears…inborn! The rest is fight or flight responses to situations, which can be trained.

What does this mean?

But point two might be a bit too esoteric for now and it’s something you need to experience on your own, since you can’t talk about it with words.

So let’s focus on point one, have you heard about the old story indian story? Since I am lazy and not going to type it out completely. 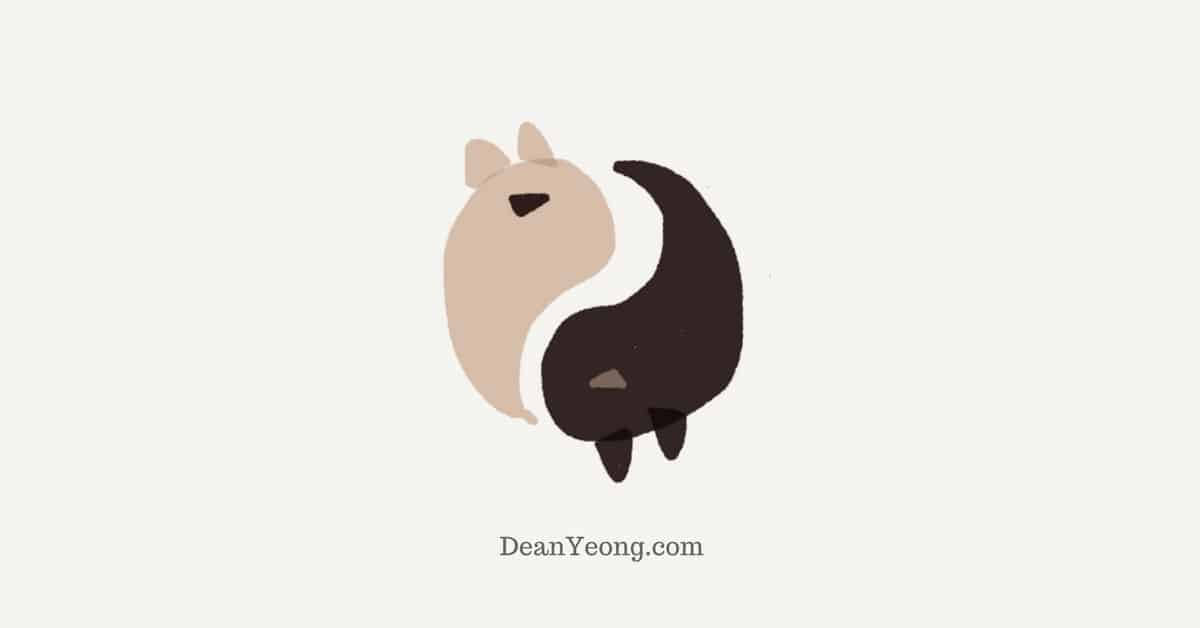 The Fight of Two Wolves Within You | Dean Yeong

There are two wolves fighting inside all of us. The first one is evil, the second one is good... Which will wolf win? The one you feed.

Going beyond the wolf story is realizing there are no wolves at all… it’s all imaginary.

Nothing I am thinking is REAL, because you can’t point to the thinker, thinking the thoughts… there is no Liquidfire init’s a label i created, a memory, a story.

Interesting…Does this conviction has a name and/or are there any articles about this way of thinking?

It’s not another believe system, that’s the thing.

It’s where all other belief systems are painted against, and take their energy out of… it’s always been there and always be there there, regardless what you thinking.

Where is the thinker that thinks these thoughts?

I can only point you TOWARDs it, just like Eckhart Tolle does any many other spiritual teachers, if I say that it is this, that is not it!

I will stop posting here now, if you want to have more pointers feel free to PM me, or ask me in my own thread. I don’t want to hijack Saints Thread.

Interesting…Does this conviction has a name and/or are there any articles about this way of thinking?

I read a similar mode of thinking in this book: https://www.amazon.com/Prometheus-Rising-Robert-Anton-Wilson/dp/0692710604

Fair warning, this may be considered “magick.” Of course, that’s a silly ass label to stifle free thought, but whatever.

Thanks @Liquidfire and @SaintSovereign I will take a look at it.

Who is the master that makes the grass green?