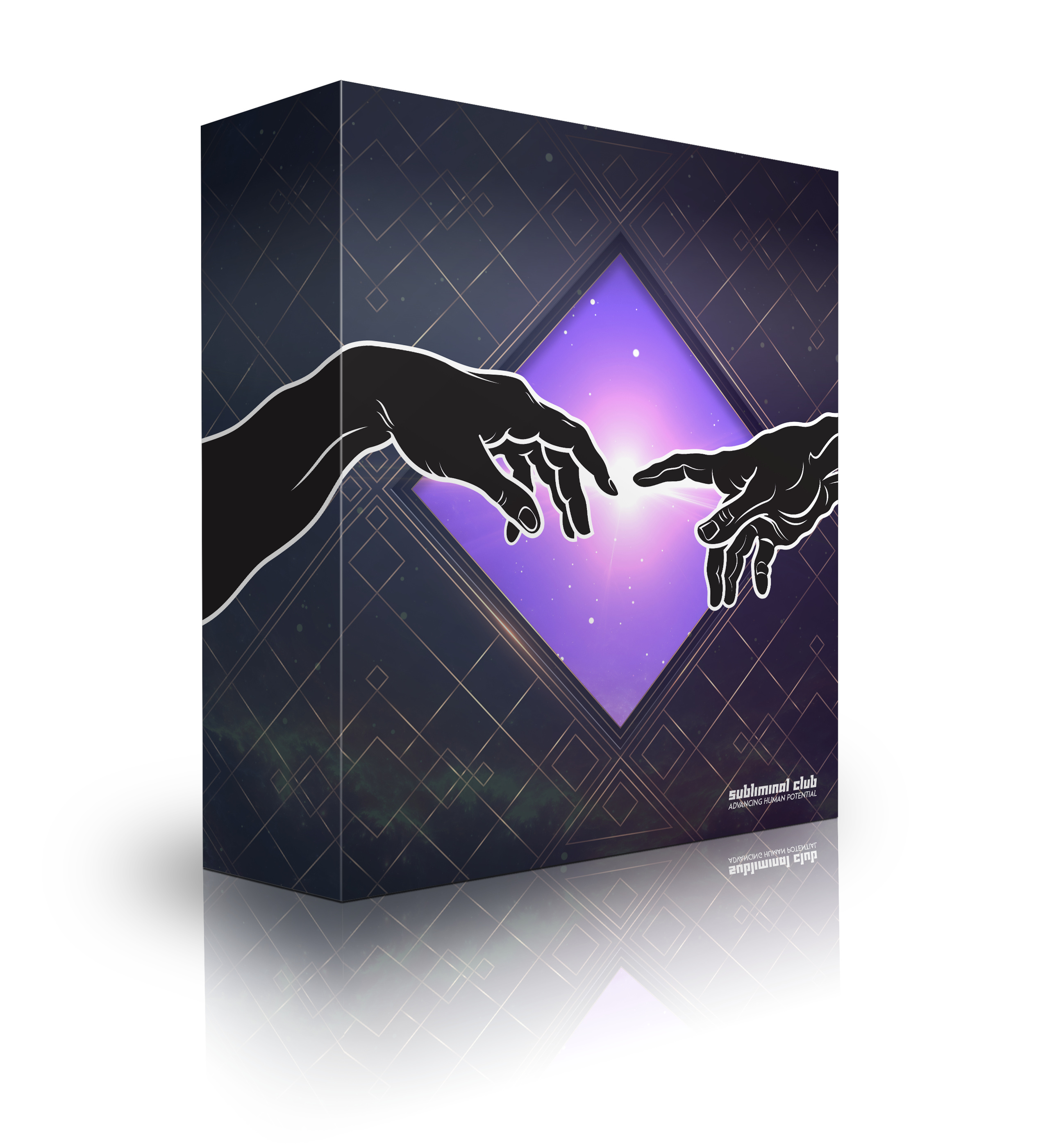 Why does he carry such a title?

What does he stand for?

One single, distilled essence that filled each man with the power to shatter the bonds of perceived reality of the time…

One quality that set them apart from all the rest…

Their unyielding, dreaming spirit and relentless drive for self-expression.

Renaissance Man is a subliminal designed to shatter the blocks on self-expression that you have – be they self-made or forced onto you from the outside – and allow you to unleash your creative spirit and explore the endless mystery of life and reality.

On Renaissance Man, you will plunge yourself into discovery of beauty in all forms. The limits you have between yourself, the world and the people around you will blur, creating a powerful new fascination with life and inner knowing of all that is happening around you. You will feel yourself becoming freer and freer – The Renaissance Man is the ultimate free-thinker, and no emotions can be left unfelt, be they the highest pleasures of love or the lowest pangs of fear.

Sound intense? It is.

However that is the power of the Renaissance Man. Pure intensity and zest for life coalesced into the form of a man, allowing him to use such intense states and connection with everything around him to create masterworks of art (of any form, be it dance, photography, writing, etc.) and use it to excel in anything that has an artistic or creative aspect to it (such as programming, security, theoretical physics etc.). Indeed, some of the greatest masterpieces of humanity were created by utilizing the power of emotion.

As a newly rising Renaissance Man, you will see your ability to connect with others increasing massively owing to this intensity. You will become able to feel what others feel and sense their thinking.

But Renaissance Man is the ultimate free-spirit, so he must not be overwhelmed or else his mission will be in jeopardy. For this reason, the Renaissance Man, similar to StarkQ, has a frame of steel alongside an almost fanatical belief in himself and his creative goals, creating a powerful field that seems to pull others into his vision, allowing him to become a profound thought leader if so desired while protecting him from being overwhelmed by the emotions of the world around him.

The Renaissance Man is the soulful and emotionally-liberated alpha who receives respect and adoration of others through his intense love and fascination of life – by releasing his chains of logic and plunging deep into the world of emotions, dreams and creativity.

Indeed, as a Renaissance Man, you will feel completely unburdened by risk and experimentation. Risk only adds to the spice of life for you (of course, with safety scripting), and you will experiment with putting the wildest ideas into real life.

A dreaming wanderer, the Renaissance Man is the creator of worlds through the sheer power of creativity and fervour. He streams across the clouds, builds his own worlds, flies and flows through them with his limitless soul…

But to realize such worlds and bring them into reality, the Renaissance Man has scripting to help you put these ideas into concrete action, as well as manifestation of opportunity, wealth, and other individuals who can help you on your journey. Creating masterpieces will become easier and easier as Renaissance Man guides you to the optimal flow state, as well as mood. It will help you get through any creative blocks while teaching you how to easily put the grand ideas you have in your mind into reality, in the most profound way possible.

In fact, Renaissance Man will also be generally developing your skills of art, guiding you to the proper techniques and giving you the ability to research the techniques of others, even perhaps those of the ancients.

Furthermore, while you could run Ultimate Artist even if your aim was not art specifically but creativity, the Renaissance Man has a plethora of other aspects that will benefit those who have no interest in art in any form.

If you are ready to become the creator of worlds…

Note: If you run Renaissance Man, please give us feedback. This one’s a bit special.

I’m gonna write more on it but wow, really good - I’m glad I checked itout
hope I can add it to the current stack
it’s pretty good. -> still, I gotta stick with my stack for now, maybe later

Seems like a VERY cool concept and I’m glad it’s not a multistage , I think many have been asking for a single-stager cuz it seems easier to work with often

Thank God it doesn’t particularly appeal to me right now, or I’d have another crisis “how do I stack all this”
my current stack with 9 programs ftw

(all I need rn is covered by what I’m currently listening to, it only took 9 of your programs across 3 customs) -
Nth edit: having said that, it actually does appeal a bit, it really does, but yea, I really need to stick with my current stack

it really resonates with me still and is amazing, just need my current stack! - still, excited for all those who get what

they’ve been waiting for. - enjoy!!

Thanks for your great work, I’m sure it’ll be amazing once again!

EDIT: giving it test run now
it’s that I read the description too fast not noticing it can be used by ppl other than artists at first
let’s see

Must be DR taming the desire at the moment. Gonna get my copy eventually, although not now.
Currently trying Spartan & Daredevil and holy shit I’m loving the combo.

Although, I wonder how’s this gonna rock my world once I enter college late this year.
Now THAT’s hella fresh. A college life with Renaissance Man. The big man of campus, guaranteed!

Wow lol, maybe it is also DR helping to stay on the right track for me.

thank the Lord everything seems covered for now with the current stack, I want to get the most out of these awesome products (each and every one of them)

Khan has and will be one of my most favourite programs - still going !

Note: If you run Renaissance Man, please give us feedback. This one’s a bit special.

IT OUUTT!!! This looks amazing, very different, in a good way than expected.

Unfortunately , it appeals to me more than I thought it would

I will be getting and testing it out Sunday and will give feedback.

It may replace Emperor custom in the stack if ok to run with DR.

Sorry man, I’d love to run it but the current stack is too heavy - I do wish we could have something to put all.9 cores into (so as a maintenance format - after having run the programs for months, you can now keep it as a refresher) would this ever be possible?

Do you think this may become part of the roadmap sometime as you release more and more products?

Looks amazing and exactly what I’ve been looking for. Great job with this @Fire @SaintSovereign and so happy it’s single stage.

Wanting to put this in a custom with Stark, any idea when it’ll be up in the Q store?

Wanting to put this in a custom with Stark, any idea when it’ll be up in the Q store?

Already ahead of ya: https://q.subliminalclub.com/product/renaissance-man-q-core/

Imagine the next 2 mod packs with this sub out now lol. So many cool modules they can take from this. Wouldn’t be surprised if the empath module in the q store is sorta in this.

I believe we have the full set of elemental alpha titles:
Renaissance Man - the water alpha
Khan - the fire alpha
Emperor - the earth alpha
StarkQ - the air alpha

YES! The hype was real in my subconcious! Thank you!

@SaintSovereign - please check the DMs. Need some advice on an unrelated custom sub

It is for both genders ?

Would EQ and RM mix well or no?

This oughta be fun! Listening to a loop now.

This sound like the last piece of a puzzle that i didn’t know was missing a piece, @SaintSovereign long since you guess talk about this sub i wanted to add it to a custom, might add this it will definitely add to my goals for this year
So thanks in advance
Also hope the I’ll be able to get this name embedded soon

I am curious about what a bit special means.

I was thinking of buying Champagne earlier this afternoon. Should’ve went with it

Edit: I was expecting it to be more expensive than that. You’re good people.

I am curious about what a bit special means.