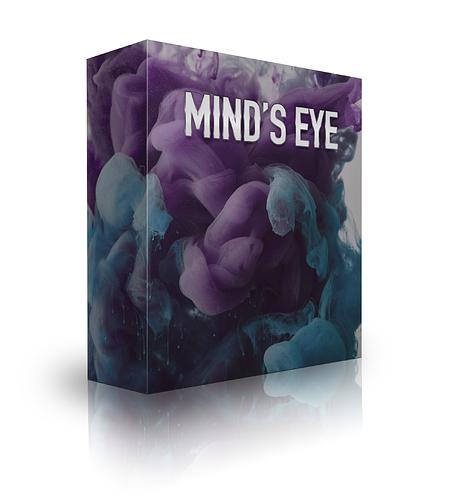 The first of our new MENTAL SUPERCHARGERS line of products:

Mind’s Eye is a three stage guided audio program that will help you train, enhance and cultivate your ability to visualize in your mind. Almost every classical and modern major alchemical system holds visualization as one the most powerful tools for inner growth and change.

Utilizing creative visualization in your day to day activities can enhance every part of your life. It can supercharge the law of attraction, help you acquire / build skills (hence why most successful athletes practice it daily), manipulate and bend your personal reality, enhance your creative potential and more.

A simple Google search will reveal the numerous benefits of creative visualization. I naturally possess a strong sense of visualization – able to not only create and “see” images in my mind’s eye, but also smell, taste and feel it. Much of my personal success comes from my ability to visualize myself in different situations and model certain outcomes / responses, then manifest those possibilities into reality.

Mind’s Eye will teach you how to accomplish the same thing. Each stage will contain a number of exercises that grows more difficult as you proceed. In stage 1, you’ll start off by drawing rudimentary shapes on a piece of paper, then recreating them in your imagination. Then, in the same mental space, you’ll transform those 2D shapes into 3D shapes, rotate and manipulate them, and slowly adding more and more detail to them.

By Stage 3, you’ll be able to create (and hold for an indefinite amount of time) extremely detailed and unique images within your mind. We’ll also discuss how to use this ability in your day to day life.

Welp, I’m even more tempted now to buy Alchemist to prep before this comes out. Exactly what I’ve been looking for to improve my imagination.

This is the product I was most excited for on the roadmap, looking forward to it coming out!

What will be the listening schedule, and how much will this line be priced at

I am currently running Khan i think its going to be too intense running minds eye and multi stage khan. What is everyones thoughts ?

Do we have an official release date?

New to the forum. Haven’t actually typed an introduction yet, but this is intriguing.

I am an INFP, aphantasic here. My experience agrees with what Saint has written on another thread (about aphantasia): “mainstream “science” may be on to something this time – your ability to do this [vivid mental visualization] (or lack thereof) is the result of your cognitive function”.

In that same post, Saint writes: “My ex-girlfriend was an ESFP and she told me that she literally sees nothing, but “hears” things instead.” Although I’m an INFP, this is close to my experience. If anything sensory happens, it’s likely to be auditory. But mostly what I experience is clairsentience, impressions, ideas, and ‘knowings’, not very associated with a sensory matrix.

The subjective sensation when I’m working with visualization tasks is something like ‘swimming against the current’. Occasionally, the flow shifts, and my mind sinks into a visualization experience. Forcing it generally does not work. So, instead I’ll usually ‘act as if’ I’m visualizing, or perhaps more accurately, I act ‘as if’ the visualized object is actually real (and then let my subconscious processes meet me halfway or as far as they’re willing/able to meet me). It’s more pretending than visualizing, I guess.

On some very rare occasions, the internal resistance to entering that visualization space has disappeared, and I was left with a crystal clear image, but the last time that occurred in an intense way was in a more extreme altered state experience (Holotropic Breathwork) about 18 years ago.

I guess I subscribe to the notion that some cognitive processes are closer to your ‘surface’, while some are a bit further down, and others are deep. The ‘surface’ processes are easier for you to utilize intentionally, in the state of ‘ordinary’ waking consciousness. The processes that are further down may be more accessible from altered/non-ordinary states, when the usual control mechanisms and patterns are relaxed.

Most of this post probably fits better on that aphantasia thread (from January or so), but I’m posting it here because I’m curious about whether the Mind’s Eye supercharger would be relevant to someone like me. (At this point, I’ve made a sort of peace with not having easy access to strong visualization ability.)

Do we have an official release date?

Later this month. The voice actress is currently taking a short vacation.

I wonder if this could also help with audible visualization (mind’s ear?).

I think you shouldn’t take the words visualization and Mind’s Eye too literal. Good visualization involves all the senses, including auditory. And the goal of this program is to get you there. Seeing a majestic bird fly through a starry sky, hearing its call, feeling the poop as it lands on your upturned face.

I’m actually surprised nobody has asked for the expected price tag yet. It’s a supercharger, but a new kind of supercharger. And it’s got three stages.

Not that I would ask of course. As a matter of fact forget I typed anything.

I’m actually surprised nobody has asked for the expected price tag yet. It’s a supercharger, but a new kind of supercharger. And it’s got three stages.

Not that I would ask of course. As a matter of fact forget I typed anything.

If one is already listening to to three super chargers dont you feel its a bit too much.to.liaten to another 3 on top of that ?.

Wow! I am so amazed because I always have had problems visualising. I can never control it. For example I intent to visualize a school board and I expect it to be nice and calm, like in real life. Instead what happens is the board goes crazy and flips arround, falls on the ground… can not control it. And I also quickly lose th entire room and zoom in on that crazy school board.

it really leaves me baffled. But this sub can help me solve this problem?

If one is already listening to to three super chargers dont you feel its a bit too much.to.liaten to another 3 on top of that ?

Another three? This is three stages, but they sound like progressive stages to me. As well as less like a supercharger and more like a guided course. By the time you can comfortably do the hardest exercises on the final stage, you pick a time of day to practice your visualization and run through that exercise.

Unlike the current line of superchargers that you run in the morning, evening or before going out.

I asked for this but I never got a reply

So you did. I stand corrected. I trust both questions have now been answered to your satisfaction?

So you did. I stand corrected. I trust both questions have now been answered to your satisfaction

Not really I don’t know how to listen to it

It’s pretty much in the last two paragraphs of the description above. It’s a series of exercises that get more difficult as you progress. So first you draw something on a piece of paper that you then have to “copy” in your mind, after which you start changing it in your mind. When you’re comfortable doing that, you lose the paper and draw it in your mind only. Then you start adding depth to it. Next, adding more things, describing them in ever greater detail. And so on and on until you can create entire panoramas using all your senses.

At least, that’s how it appears to be.

It’s not like the concept of superchargers like you have them now, where you sit down for 9 minutes, imagine a few things, then move on. This one is more like homework.

Any ETA on this?

This will be my next purchase, then Alchemist later once I finish my run on EoG.