After 2 weeks of deliberation, we’ve finally arrived at the last stage: the finals.

It was an eventful tournament filled with surprises:
Emperor Black’s underdog run.
One of the tournament favorites in Stark was ousted in the group stage.
WANTED’s complete dominance in every stage.
The razor-thin battle between Khan and Emperor Black in the quarter-finals being decided by 1 vote.

But alas, we’ve come to the end. The two semi-final matchups were extremely difficult to pick and unfortunately, where there are winners there must be losers.

WANTED vs Khan: In the battle of the two subs known for their seductive properties (amongst other things), WANTED’s tournament dominance is rewarded with 58% of the votes and an appearance in the Finals.

And now here we are, the final matchup: WANTED vs Love Bomb for Humanity. Who will prevail?
And for third place, we have Emperor vs Khan, a matchup for the ages.

Am guessing WANTED vs Khan in the finals.

You are mistaken: The Finals are WANTED vs LBFH, Khan vs Emperor is a concession matchup for 3rd place.

The World Cup will either be WANTED’s, or LBFH’s.

If it is WANTED vs LBH, that would be a very interesting match. Nonchalance vs “chalance”.

It’s no “if”, that is the Finals matchup. 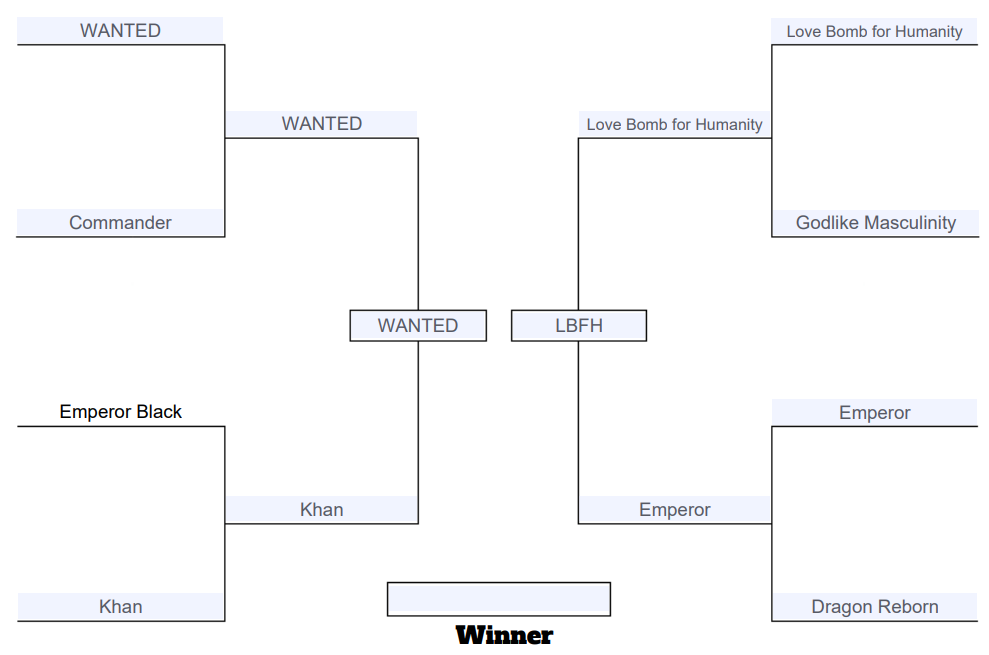 Love the appreciation for LBFH. It definitely seems like an oddball between all the other fan favorites that tend to be alpha subs. The quality of that sub is just soo freaking high and it does so much!

Still funny to me that that sub is an “experimental” because saint couldnt guarantee it would be a success at first.

One more of these to go, @bombayduck

We’ll close the voting and wrap up the tournament tomorrow morning.