We’re about to change the game again, being the first subliminal producer to officially maintain and support a roadmap and feedback / idea product portal. For those of you who don’t know what this means, it’s an application that will allow you to suggest ideas directly into the product portal and vote on the ideas others have suggested. Then, as we approve / accept your ideas, they’re listed on the official roadmap, where we can post updates on those items. This way, you’ll have an idea of what we’re working on and have access to official news without it getting lost on the forum.

Note, this does NOT replace the forum and is not a place for chatter. We will delete off-topic comments, journals, etc. It’s just a way for us to organize all of the ideas you’re generating and see what really matters to our customers. Also, please keep in mind that just because an idea is popular or highly voted, doesn’t mean we’re going to rush and do it, or that it applies leverage on us to do it. It’s an organized way for the community to let us know what matters. Let me show you what this looks like with some sample ideas that we entered. 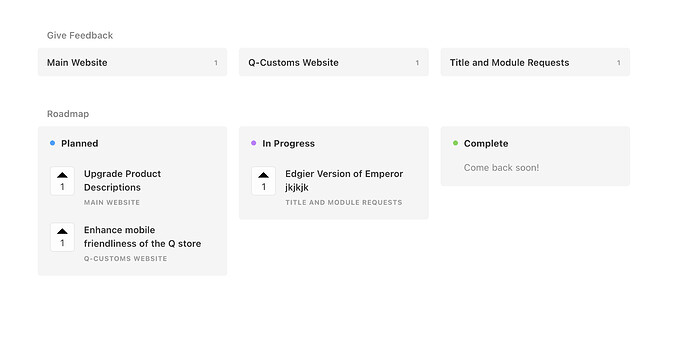 And the actual feedback and voting section:

Note, the portal is still a work in progress, but we wanted to go ahead and let everyone know that it’s coming very soon. Now, here’s the one downside – for now, we’re limiting who can directly enter information into the portal, as these services generally charge per user. We’re capping ourselves at 100 users, which is probably more than enough for now. Everyone will be able to access and read it,

Before we let the general public / new users gain access to posting ideas, we want to reward our long-time customers first. Sign-ups will be first come, first serve, and if you don’t use your account, we’re going to delete it to allow someone else to access it.

First up, if you hold the SubClub Elites rank of Arch Alchemist, High Alchemist or Junior Alchemist, (or, you’ve reached that post count) send me a PM and I’ll send you the invite link. In a few days, I’ll update this thread allowing the next batch in.

Once we’ve hit the 100 user cap, if you see an idea posted on the forum that isn’t already in the queue, please enter it into the system and vote.

If the system is utilized, we’ll upgrade everything and allow more users and more votes. If no one uses it, we’ll create a basic roadmap thread and try to keep everything updated there.

This is exciting as hell. I have ideas I’d put in for sure!

Would there be a way for us to “nominate” someone for inclusion if we value their contributions in the past? Got a few ideas there of who I’d nominate also.

love how everything is going with subliminal club going into 2022 !

It’s lovely
I hope I get entered
Because, I dunno if it’s my ADHD or sth, I think outside the box. All my friends tell me I am a good analyzer of social i interactions and power dynamics. Like I know how the base works.
So I guess I could give some constructive ideas. But in the forum it’s not organized. For the most part I just read your comments. Not others.

that’s a fantastic idea and I’m full of them! I hope I can join soon.

Everyone will be able to access and read it

SC invests MONTHS developing each title. Others churn out their scripts in 1-4 days.

Doing this means letting them boast how they came up with a product before SC.

I understand if this is kept "Closed Access, By Invitation Only."

SC invests MONTHS developing each title. Others churn out their scripts in 1-4 days.

Doing this means letting them boast how they came up with a product before SC.

I understand if this is kept "Closed Access, By Invitation Only."

I don’t think this really matters even if they bring out a title before SC since they can’t deliver the results.
SC are my first subliminals I have used and I did not even care to ever look up what competitors have to offer. I think the loyal rate is very high among SC users since SC is also very consumer friendly unlike the competitors. This new product portal is just another proof how much they care about what users want.

I wish the decision on who gets in in terms of idea contribution and voting access is based more on how many titles they’ve purchased rather than how many posts they’ve made here. Some people like to be more private and therefore post less here and this is going to be a good avenue for them to offer feedback. Those with high forum ranks are already contributing a lot.

Why does it seem like a competition of who gets in?

I’m not going to even apply.

I do have some ideas, but I’m going to ask someone else to submit them for me, if needed.

I think I would be just over the limit for posts. Can’t really remember how the rankings went.

We have only 32 Arch Alchemists yet, and many of those overlap in the High & Junior totals.

Consider also that Saint’s most Liked Reply got 76 clicks.

We won’t even find that many active likers on the forum right now, let alone posters.

We won’t even find that many active likers on the forum right now, let alone posters.

This was exactly my thought. 100 is probably more than enough for everyone who wants to get in to get in.

And it’s not a “popularity contest.” We’re essentially creating an advisory group with the power to shape and influence our company. Of course we’re going to give preference who have contributed to the forum / business longer. Why would we give preference to people new to the company?

Screw ‘em. Too long have we been afraid of what copycats will do and allowed that fear to stifle our engagement with the community. We have people thinking we’re just a bunch of marketers because we literally have to hide just how much we know about the subconscious mind.

We’ve decided to drop that fear-based mindset and start democratizing the subliminal industry to an extent. Why should a few people hold and hoard all the knowledge and then act like philosopher kings?

From the start, we’ve always said that you were your own hero and not to idolize or deify us. We’re just two intelligent entrepreneurs with a passion for this industry who applied big tech principles to the subliminal market.

We are going to innovate in ways no one expected. There’s so much on the table right now — radical things that could lead to a radical transformation of the industry where the customers get even more control over the industry.

Transparency is what this industry needs. And we’re going to do just that.

lead … a radical transformation of the industry

As you’re in full Chosen mode, may I ask:

"What is your Vision for the subliminal / personal transformation industry?"

Of course we’re going to give preference who have contributed to the forum / business longer.

that’s cool, that was my point. Contribution is both in the form of dollars and feedback.

I’d also love to see a more structured/canonical way of providing feedback for a certain product one has purchased, in the form of a questionnaire, across the different benefits it aims for (ranking 1 to 5 for example). This will bring out feedback for people who prefer not to share stories publicly.

You mean like the checklist objective for each sub?

yeah, key objectives for each product. I’m sure the guys know this better than I do, but those questions can be formulated in a way that can force you to notice effects as well.