How long does it before results are permanent? Let’s suppose this question is for a sub working on changing personality/manifestation abilities in some way, such as Emperor/Khan ST4/Alchemist ST4 (as opposed to the breakdown/clearing type subs).

I know that people are of course susceptible to influences from life that can change them. But I am of course looking for an answer that is assuming that the user isn’t subject to another major influence (subliminal-like or otherwise) after that user has spent hundreds of hours listening to/taking action based on the subliminal.

Wow that’s a very complex subject. It depends partially in how much your belief system has changed. Our beliefs are what causes us to do the actions that we do. And why we do certain things. It’s not completely subconscious.

It’s also partly conscious that’s why you hear somewhere on sub club website where they mention something like they like to work on both conscious and subconscious parts of the mind. Might be with regard to their superchargers.

When beliefs are changed consciously you can control the outcome of your actions and get the results you need. Monitor your beliefs when you feel certain emotions. Try to dig down and see what beliefs are causing the emotions and try to change them consciously and let the subs creat the changes subconsciously. This is in line with taking action.

As i remember @DarkPhilosopher said somewhere something like everything is permanent if you allow it to be. Information doesn’t disappear it just gets overwritten.

I don’t think any change can be forced on a person without him allowing the change to happen.

Glad I’ll be using Superchargers to align my conscious with my upcoming subconscious programming then.

I love this, people using my name like that. “Yeah, President Trump is pregnant with twins. DarkPhilosopher said that somewhere.”

Some of the older cities in the world have a road system that appears to make no sense. Until you look back a long time and you realize that before there were roads, cattle and beasts of burden traveled from place to place, always choosing the route of least resistance. Human beings then traveled in that same path because it was already nice and flattened. Slowly they became dirt roads, then cobbled and finally paved roads. But it all started because a herd of animals chose to walk the most efficient route.

Your subconscious patterns are like that. following the road most traveled. Nothing gets overwritten, but if there’s a choice between behaviors A & B, and behavior A has been used more, it is the path of least resistance. And so that’s the one that keeps happening. Unless you consciously force yourself to take behavior B often enough that it becomes the most traveled road instead. 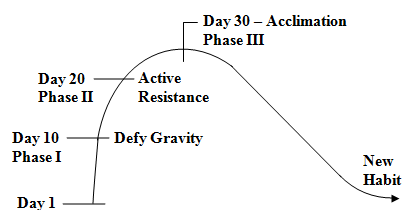 I love the rocket launching into space analogy.

In order for you to change, you need to spend a ludicrous amount of fuel to keep walking that new route, every single day.

As you build momentum, it becomes easier. But the other road still pulls at you like gravity. This new road is rough and exhausting, the other one so smooth and easy. It’s easier to fall back into the old behavior. More comfortable. Why do you keep fighting it?

Then you finally get to that magical point at the top of the roller-coaster mountain, moments before the fall, where all it takes to keep traveling the new road is a gentle daily reminder. You can still fall back to old behavior if you don’t watch out, but the new road is no longer exhausting to travel.

And then finally you have reached escape velocity. The point where it takes almost no effort to stay on the new road. The more you travel it, the easier it becomes to do so. You stop having to think about it. The old road may still be there, but it is now overgrown with weeds.

How long does it take for the behavior installed by the subliminals to become permanent? We haven’t mapped your mental geography, so there’s no way to know. It all depends on how rough the terrain in your mind is, how comfortable the “old” road, how well you sleep and how much energy it takes every day to keep on the right path. But if you travel the new road often enough, it’ll get easier and easier.

This has been another post by DarkPhilosopher for the SubClub Insider blog.

@DarkPhilosopher Ahh here it is.

Are these results permanent?

Everything is permanent, which is why it is so easy to fall back into old behaviors and addictions even after you’ve changed them. The thing that matters is which is more permanent.

Couldn’t you have quoted me before I spent an hour composing my answer?

Lol didn’t know where it was. Plus this version is better.

I feel like there are a few different metrics or perspectives that could be used to discuss this question of so-called ‘permanence’.

I think that #1 is easier to make permanent.

Permanence in this aspect is what I have in mind

I do think subliminal club subs results are pretty much permanent. Just your focus shifts consciously so that you don’t notice how you behave differently…

Yea, I’ve definitely fallen into this trap. Journaling helps to look back and notice that things were actually different before.

The Road to Khan

When it comes to breakthroughs and realizations, I find myself itching to start with, “Lately, I haven’t observed too many major breakthroughs” before remembering that there’s a bunch of stuff I wrote above. There really is a benefit to journaling, it seems.