Into The Unknown - (Friday's Diary)

After the 1 and 1/2 rest days productivity seems to be spiking. Now is day 2 and I will listen to one loop in the evening giving me 2 1/2 rest days in total.

The drop in productivity isn’t that bad this time 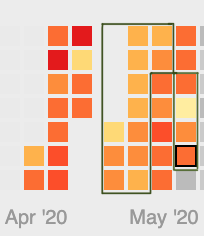 The days which are circled with green are the days when I listened to Terminus. In the first round of Terminus my productivity dropped significant. This time I am pretty good on track. Even though, I had one day where I did not do any Anki Cards (the yellow one two days ago) this was a day where I celebrated with my family.

However, One loop of Terminus is enough to still make me very tired even after sufficient rest time.

dk if you mentioned this before but what visualization program is that for all the colored square?
Is it an anki extension?

Is it an anki extension?

On all days I listened to Terminus I overslept - On all rest days I got up in that.

I am following my schedule having only 3 loops per week.

Yesterday I felt like I am close to a breakthrough as my productivity was really spiking again. Today, I am again questioning everything and experience a strong urge to switch subs again. I know this is nothing more than reconciliation but I am just wondering if this whole torture is worth it. Especially when I then buy my custom Q subs with just the normal power level. Or will I then miss out on something?

Try out the following listening pattern; start out your day with a loop of Stark Q Terminus, then proceed listening to the regular Stark Q. Report if you notice any reconciliation, if not, add another loop of Terminus, in the afternoon. Worked for me, all is going very well and haven’t actually been noticing any reconciliation whatsoever.

Perhaps your sweet spot is in fact one loop a day. Perhaps stick to that for a few weeks ?

Thats great i did the reverse and had great results and that has been my listening pattern for about a month for most subs. I’ve listen to stark Q then add one loop of SarkQT.

Perhaps your sweet spot is in fact one loop a day.

@Hermit this many loops will be overwhelming for me but I decided to add normal StarkQ to my Terminus schedule. Thanks for the recommendation

I think I had a breakthrough yesterday night

Mind to elaborate on the breakthrough? You mean like listening pattern?

Mind to elaborate on the breakthrough? You mean like listening pattern?

In the last days, I had a feeling that reconciliation is slowly getting better with moments of euphoria and great productivity. On Day 22 of Terminus, I have reached a breakthrough. It is like my mind was clouded and the veil now faded away. I am again in this state of mind where I can clearly see what I need to do… and ultimately what I did wrong in the last weeks of reconcilation. The last time I had such an epiphany moment was on EmperorQ, where “my social mind awoke again” after months of preparation and intense studying for an exam.
I am now able to handle more exposure to Terminus without experiencing frustration or such intense tiredness.

1-2 days before that breakthrough I had an intense urge to quit subs but I kept to it. I was like: “What else should I run stupid?

Yesterday I felt like I am close to a breakthrough as my productivity was really spiking again. Today, I am again questioning everything and experience a strong urge to switch subs again. I know this is nothing more than reconciliation but I am just wondering if this whole torture is worth it.

Feels here, it’s like if your mind is getting crushed by too much pressure and start freaking out before surrendering.

Na bruh, no matter how you look at it. An “audio file” cannot alter or manifest something outside its reach. That’s lunacy.

The subliminals aren’t manifesting anything — is just a set of suggestions and challenges to your beliefs. Your mind does the manifestations. The appearance of angel numbers is a phenomenon that occurs when you consciously become aware of the relationship between your subconscious mind and reality.

The following is what I wrote down yesterday but did not post:

I am going through a lot of radical changes right now. My journey towards increased productivity and excellence of the mind finally lead me to spirituality.

But it is not quite precise. I think this change towards spirituality was well prepared from my subconscious mind. The moment I rediscovered what spiritually means for me, surrendered to my own intuition and allowed the dots to connect, a weight was lifted. This heaviness from reconciliation got lifted. After the Q-store drops and creating my custom subliminal, you will probably not see me for a while as I need to go on a full detox from electronic devices…

will be good to see you whenever you do come back

@Hermit After two rest days, I started to listen to one loop of Terminus.

I was doing my meditations when I laid down to get a quick rest. Now something strange happened. I began to see green and violet geometric figures and heard a strange sound like vinyl. This repeated itself until the visuals and sound got more intense. I began to get afraid and thought I might drove off and Astral project but did not prepare for something like this. So I woke up, the visuals stayed for one-second even after opening my eyes.

When I meditate and try to be present while falling asleep, I often hear such sounds.
One time I was ripped out of my body with an even greater scream. But back then I thought I just had a bad dream or something.
But till this day, I never had such experience while taking a power nap

I think most of us are raised and trained to dramatize the significance of psychophysical changes that occur in contemplative practice. I know I was. It’s sort of one of the last domains in which we allow magical thinking to survive. Not saying you were doing that, but this is what your post made me think of.

There’s a book by Master Nan Huai-jin (rest in peace) called Tao and Longevity. In it, Master Nan describes some of the neurobiological concomitants of meditation and spiritual practice. It’s pretty cool. He’ll talk about how, for example, when qi (or you could think of it kind of as ‘dynamic activation’) reaches the occipital lobe region of the brain, it’s common to see light and color-based phenomena in one’s meditation. Or how when it gets to the temporal lobe area, auditory phenomena are common.

Since our contemplative sciences are pretty primitive in modern times, we’re more prone to frame these kinds of phenomena in very magical terms.

I remember that when i was about 19, after a very interesting series of events, I ended up kind of woozy and having an intensely emotional and mentally-focused period in the middle of one night. At some point, there was a kind of ‘ding’ and it seemed like the whole world went quiet and I felt that I was floating upwards and backwards away from ‘my body’. Blah blah blah. I had an experience, felt that my entire life and world had been reformed and blah blah blah.

But anyway, the point is that at that point in my life, the best frame of reference I had for such an experience was Judaeo-Christian cosmology. So that was basically how I framed it. No crime there, but it’s just that I would frame it quite differently now. Not that I’m any more ‘right’ about these things now. That’s actually the precise point. My point of view now would include much more apophasis and agnosis. Much more acknowledgment of the limits of (my) understanding. For me, personally, that’s growth.

Not really making a specific point here. Just that reading your post kind of reminded me of this aspect of my own experience.