Unless you try to do something beyond what you have already mastered, you will never grow.
– Ralph Waldo Emerson

This feeling that everything is going to be just fine with the current crisis, that’s Aegis, right?

I’ve been having a bit of a difficult time since I started it. Yes, I feel great mentally, but at the same time I can’t seem to focus on work, can’t get momentum and enthusiasm going. It’s like moving through tar.

Then again, I haven’t been feeling 100% since the weekend. A bit of a clogged nose, yesterday my eyelids felt like I had a raised temperature which wasn’t the case, and I have been feeling a bit chilly. Finally, I can’t seem to become “awake” in the morning.

I want that EQ bring-it-on motivation back.

Don’t worry about failures, worry about the chances you miss when you don’t even try.
– Jack Canfield

Took me half the day to get into the groove of things yesterday. Had a dull headache for most of the day. But I’m satisfied with what I accomplished.

Something odd happened. I’ve been spending most of my time on my comfortable backside and haven’t done a lot of exercise. But yesterday I notices my glutes and hips feel as if I’ve been doing a LOT of exercise.

So I figured I’d do some yin yoga, get those muscles to stay flexible while healing. And even though I felt more discomfort than I’ve felt in a long time while stretching, I was also able to go really far into the stretches. I mean, I was able to do this one… 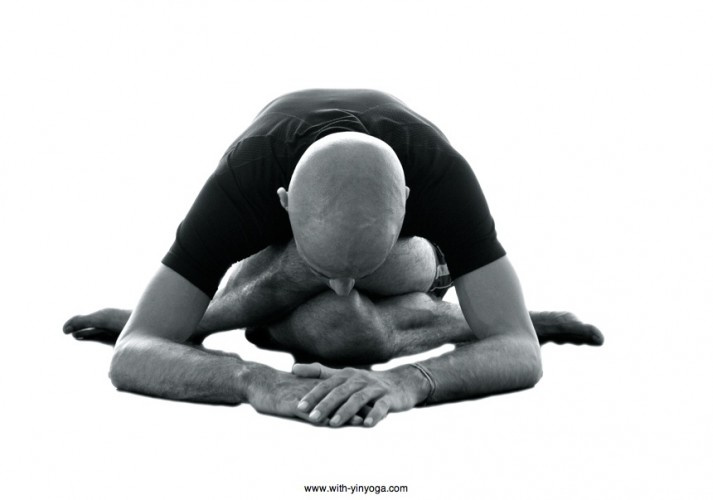 image.jpg713×500 41.6 KB
My belly was in the way, so it was my forehead to the knee, but I don’t recall the last time I was able to stretch that far in hip-opening stretches.

I do have a theory that may be completely incorrect. In yoga, it is believed that emotions reside in the hips. The tighter the hips, the more “stuck” your emotions are. Which is why some people doing hip-opening stretches burst into tears or are confronted with all kinds of memories they have to deal with to move on.

If that is correct, then what if you reverse it? If the subliminals trigger emotional freedom and release, would there be a corresponding response in the body to “open up” the hips?

PS I know what you are thinking. Yes, that pose is very unfriendly to male genitalia.

Don’t let fear or insecurity stop you from trying new things. Believe in yourself. Do what you love. And most importantly, be kind to others, even if you don’t like them.
– Stacy London

I’ve settled into a bit of a routine being locked inside most of the time. So there’s less to journal.

There is something peculiar. Now before I tell you, keep in mind this does not have to be the subs. Could be a side-effect of my personal growth. Could be anything. Got that? Good.

There’s a question somebody once posed to me. He said that some people believe rich people became rich because they were living rich (essentially spending more than they had) and they then compensated by doing what they needed to do to support that lifestyle.

While other people started by earning the money first, then adapted to their increased means by spending more and adopting a richer lifestyle.

He asked me which of these I thought was the truth, and which would I prefer.

I’ve always been very disciplined with my money. For example, I have actually never bought a laptop because every time I want to, I realize that if I just wait a little bit, there will be a newer model. I have paid off all my debts, including my mortgage. And I don’t even heat the house unless I have someone over.

Is this a scarcity mindset? A sensible one? Or something else? I’d love to hear your ideas.

Anyway, recently I started worrying less about the money. Which is strange, since there is a chance my new job contract gets cancelled over the coming week due to the circumstances. Only one month after I started, after a year of being unemployed. With several thousands worth of bills waiting to be paid.

And yet, I have been purchasing lots of quality of life improvements. Stuff that makes me happy, fulfilled. Add it all together and I spent more in the past month than I spent in the past two years. Mind you, I was unemployed last year, so I spent nearly nothing.

So why would I suddenly change from my normal disciplined mindset into an “everything is absolutely going to be fine” mindset of abundance? The subconscious confidence that I won’t run into financial trouble in the future?

Is it the subs? What effect might this mindset have? Looking a few paragraphs above at the first group of people, what if I will automatically start compensating for my increased spending by finding new ways to support it?

It’s curious, and definitely something I mean to keep an eye on.

So why would I suddenly change from my normal disciplined mindset into an “everything is absolutely going to be fine” mindset of abundance? The subconscious confidence that I won’t run into financial trouble in the future?

Might not even be related to finances at all. I started experiencing this a few years ago also. Before that period, I tended to deny myself various pleasures. I was very frugal with EVERYTHING and was endlessly saving money. At the end of the day, however, I had a fat bank account but ultimately wasn’t happy with my life. Eventually, I realized that this wasn’t even related to fears regarding money – subconsciously felt that I was undeserving of the nicer things in life. That those things were reserved for people who were “higher status” than I was. Once I realized that, I started buying things high end luxury items that I knew I would enjoy.

Hope that makes sense. The StarkQ launch has exhausted me, haha.

Weird dream. Don’t remember much, but the last thing I remember is being in a school gym and being approached by someone that wanted me to join the local parent-organization. There was an implication there was more going on there than just planning the next social event.

Had some slow days where I couldn’t get much done, I kept getting distracted.

I did get a call from a homeless guy that works at the volunteer center. I had been wondering how he was, him being 55 and living in somebody’s shed. For him, the isolation would have been driving him crazy. Turns out he is still allowed to man the phone and accept packages for the center. At least during the morning and afternoon. It’s awesome he called.

I’ve been thinking about Saint’s answer above. Thing is, for me it is probably not a matter of status. I have always maintained it is probably best for me not to meet heads of state because I refuse to kneel, bow or show any sign of submission. As far as I am concerned I am as high in status as they are, and until they prove themselves worthy to me through their deeds, they get the same amount of respect and politeness I would give any stranger I meet.

So it wouldn’t be about status, I have that in spades. It could, however, be about fear. I spent some time in the past living on the street without a single possession in my name. I had to struggle and claw my way to where I am.

And somehow that appears to have left me with an almost OCD-like quality concerning my house. I fought for that house, my safe place, my retreat when nature or society gets too much. And I can’t deal with the idea of losing it. I check all electrical outlets and faucets before leaving against a possible fire or leak. I spend several minutes before I can convince myself the door is actually locked now, before I can go somewhere. And the idea of having no financial means scares me, because it would mean I couldn’t keep the house. I’d lose my safe place. As long as I have it, I can take on the world, but without it…

Funny thing is that if the neighborhood were to blow up and I’d lose everything, it would probably take a day to get over it and begin the process of rebuilding. I can accept force majeure, just not user-error.

Anyways, that’s why my spending spree is so surprising to me.

To end this post on a positive note, I’ve joined several small free yoga-challenges, a 10-minute morning yoga challenge for 30 days and a 5 minute breathing practice for 21 days. It’s fun to spend just a little time every day doing something that relieves stress and feels great.

I’ve also invested a lot of the excess energy into scripting. I’ve been installing a webserver at work using nothing but Powershell (with a few unfortunate exceptions), the script is somewhere around 700 lines by now. And that’s normalized, where I created functions for repetitive tasks.

At home, I found out that my Windows Powershell can seamlessly connect to Linux Powershell using SSH, so I’ve been writing scripts for Linux that will offload some of the maintenance tasks I perform. It truly is the perfect blend between the power of a shell and the complexity of Python and much easier to read than either. I’m loving it.

Funny thing is that I really wanted to take some time to play a game or two, only to find myself being just as entertained with solving my scripting puzzles.

That said, there’s an FMV game out called The Complex, about a chemical attack. Timing is perfect. I may lose some of my weekend to it.