Could we discuss Shadow Graphy instead?

I discovered two nights ago that switching on the phone’s flashlight while lying down in bed, is all we need to do, to reinvigorate this lost art.

Sorry for the instant derailment. I got carried away.

I guess shadow work is not performed by shadow people.

Reportedly haunted locations: A shadow person (also known as a shadow figure, shadow being or black mass) is the perception of a patch of shadow as a living, humanoid figure, and, interpreted as the presence of a spirit or other entity by believers in the paranormal or supernatural. A number of religions, legends, and belief systems describe shadowy spiritual beings or supernatural entities such as shades of the underworld, and various shadowy creatures have long been a staple of folklore and g...

I think it would be a good idea if you could start with your personal experience as it would appear to be the next logical step in our discussion and you have already mentioned it. In the mean time I’m going to reread the article you linked to.

No. In my view, the next logical step would be to define the terms of the discussion. Otherwise, there would basically be no shared context for discussing our personal experiences. That would only increase the ever-present probability of misunderstanding.

So, the first step is to know what is meant by the Shadow and by Shadow Work. Another relevant question is: ‘How might ‘negative thinking’ as @remarkable understands it be related to ‘Shadow Work’ as @Malkuth understands it?

That was the genesis of the conversation.

OK what are your definitions?

As a show of good faith, we should both share our definitions and understandings.

Disagreement is fine; even beautiful. If it’s genuine, anyway.

Conceptual muddledness, on the other hand, is an aesthetic disappointment.

The Shadow, in my view, can refer to those aspects of mind that fall precisely into the blind spots created by the ‘bright light’ of egoically-oriented consciousness. It’s not just the entire unconscious, which is vast. Rather, it is a smaller subsection of the subconscious/unconscious that’s something like the ‘counter-ego’ or the ‘counter-self’.

Now let me give it a more practical go.

The Shadow are the parts of my/our subjective experience that threatens, challenges, or simply eludes me/us the most. So much so that, even though it’s my experience, I do not include it in the accounts of What My Self Is.

Experientially, these parts form a Terra Incognita, a Here-There-Be-Monsters no-mans-land of disowned experiences. Some of it is generic and some is unique to the individual.

There. That an initial stab at my personal definition.

Now, how about you? Do you recognize this or a similar concept/phenomenon? Does it fit anywhere into your view of mind or experience? Or not?

Concept
The unconscious part of the individuals mental space, ie the content of the neural net that has not bubbled to the surface, so to speak.

Awareness
From contemplation either by direct action or second order effects

Use
By reflecting traits onto others and opposite traits to self

Timeline
By social indoctrination in childhood, by conscious effort in teenage and early adulthood and culminating in the acceptance of self due to the necessity of living in social groups.

We should also do the same for self talk.

Which is the inner voice pertaining to the self, construed by knowledge and experience. Experienced as open verbalisation, inner verbalisation, formed thoughts or synesthesia phenomena. It therefore follows that negative self talk is anything that impacts negatively on the individual.

Hence, the shadow influences self talk.

there’s a lot in there to unpack.

Firstly, here’s a popular visual representation of the Jungian vision of psyche: 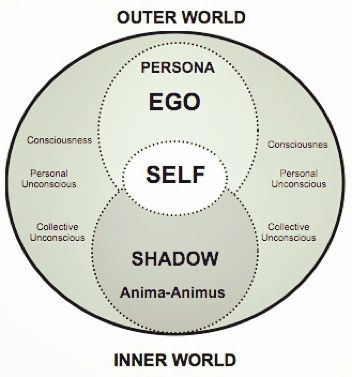 In fact, the diagram itself is somewhat problematic. The collective unconscious should be like an ocean in contrast to the more personal aspects.

negative self talk is anything that impacts negatively on the individual.

what for you constitutes a negative impact?

Of course, on a day to day level, this is a straight-forward judgment call. We survive by simplifying questions like this and making the best decisions that we can.

But if have the luxury of time and safety and we look more closely, the distinctions become more complex. More subjective. A matter of balance and degree. Most medicines become poisons if the dosage is increased enough.

Here from another website are some common Shadow-influenced behaviors:

1. A tendency to harshly judge others, especially if that judgment comes on an impulse.

You may have caught yourself doing this once or twice when you pointed out to a friend how “ridiculous” someone else’s outfit looked. Deep down, you would hate to be singled out this way, so doing it to another reassures you that you’re smart enough not to take the same risks as the other person.

2. Pointing out one’s own insecurities as flaws in another.

The internet is notorious for hosting this. Scan any comments section and you’ll find an abundance of trolls calling the author and other commenters “stupid,” “moron,” “idiot,” “untalented,” “brainwashed,” and so on. Ironically, internet trolls are some of the most insecure people of all.

3. A quick temper with people in subordinate positions of power.

I caught this one all the time when I worked as a cashier, and it is the bane of all customer service employees. People are quick to cop an attitude with people who don’t have the power to fight back. Exercising power over another is the shadow’s way of compensating for one’s own feelings of helplessness in the face of greater force.

4. Frequently playing the “victim” of every situation.

Rather than admit wrongdoing, people go to amazing lengths to paint themselves as the poor, innocent bystander who never has to take responsibility.

5. A willingness to step on others to achieve one’s own ends.

People often celebrate their own greatness without acknowledging times that they may have cheated others to get to their success. You can see this happen on the micro level as people vie for position in checkout lines and cut each other off in traffic. On the macro level, corporations rig policy in their favor to gain tax cuts at the expense of the lower classes.

People form assumptions about others based on their appearance all the time—in fact, it’s a pretty natural (and often useful—e.g. noticing signs of a dangerous person) thing to do. However, we can easily take this too far, veering into toxic prejudice. But with so much social pressure to eradicate prejudice, people often find it easier to “pretend” that they’re not racist/homophobic/xenophobic/sexist, etc., than to do the deep work it would take to override or offset particularly destructive stereotypes they may be harboring.

Some people think they’re so “enlightened” that they can do no wrong. They construe everything they do as an effort to “save” others—to help them “see the light,” so to speak. This is actually an example of spiritual bypassing, yet another manifestation of the shadow self. 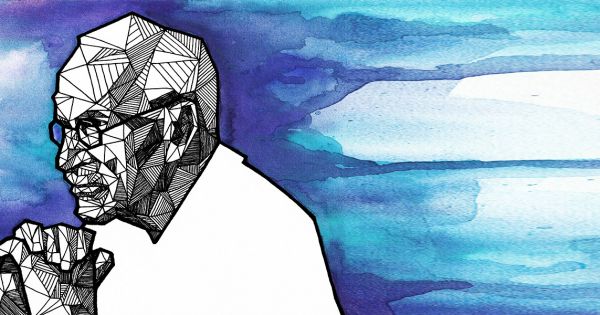 Carl Jung and the Shadow: The Ultimate Guide to the Human Dark Side

Here's why you probably don't know yourself as well as you think.

@Malkuth what’s the difference between Shadow Work and working to developing mental and emotional maturity and self awareness?

what’s the difference between Shadow Work and working to developing mental and emotional maturity and self awareness?

In my opinion? What distinguishes Shadow Work are the humility, the humiliation, and the degree of patience and self-control that are required.

On paper it can seem fascinating or even glamorous. The word ‘Shadow’ can seem stylish and almost cool.

The reality of it is often not.

I think it comes more ‘easily’ to those who have already survived loss or humiliation. Otherwise, the ego is too threatened by it.

The patience and self-control are about ‘titration’. Too much too quickly is no good. 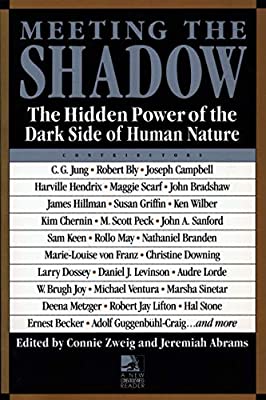 Meeting the Shadow: The Hidden Power of the Dark Side of Human Nature

I read it about 25 years ago. Found it fascinating. In the years after, I had a few small experiences. Nothing crazy; just life happening. But the fascination was replaced by fear and respect. Typical story. I think at some point I may go back and read it again, by the illumination of a little more life experience.

@Malkuth What is the difference between shadow work and doing deep inner work?