Welcome to the journal for the custom that will turn me into the coolest fucker in the whole world.

I was working on the module choices for my custom since the release of the q-store. I must have probably spent more than 44 hours on it haha, but it was definitely well worth it. All the modules are meant to enhance each other, support my strengths, counteract my weaknesses or complement what I was missing from Khan St4 alone.
So with that level of introspection beforehand, I will probably be able to tell not only why these modules made it into my list but also why others did not. So if you have any questions, feel free to ask.
Happy to answer all!

Here are my modules:

The name PlayboyQ is actually VERY fitting. Everything will be changed from the inside out for the better - Women, Sex, Friends. But most importantly, life will feel so fucking GOOOOD…

Guys, I am beyond grateful to be here on the forum with you. This is truly a remarkable place where like-minded individuals meet. SaintSovereign and Fire did their job by giving us the possibilities, now it is OUR turn to use them. Let’s advance human potential together!

Really grateful and excited your journaling on this and can’t wait to hear your discernment and experience of the modules.

I definitely earn the reward for the most active journal on the forum. One introduction post and gone I was

How is this going for you man? Interested to build a similar "enjoy-life, khan based custom as well…

Have you noticed anything from the Temptation module?

Curious about temptation and attachment destroyer modules. I am considering using them in my own custom.

Renaming of the thread

Temptation is in my terminus Emperor build and it is fantastic. At first I though it would have me just playing coy, but it just seems to build and build interest from woman.

With that custom, the idea would be basically to give extra boost in the areas that need it the most. There are no gimmicks added. No more procastination, no more fear, no more addictions, only sheer dedication to work on the stuff that I need the most. What do you guys think?

Well, I haven’t written much yet haha but I am sure it gonna be grand.

How was the results you got from your first sub? Did the healing went okay?

I am finally back and ready to start journaling regularly here again on the forum after receiving my first custom on June 24. A lot of things have changed since the lockdown, and there is so much I wanna talk about. But first I wanna share my experience with my first custom sub and indulge in the nature of such custom.

As you might know, my first custom was created to turn me into the coolest, most successful, hard-working, and life-loving person in the Universe, while getting rid of all attached traumas and beliefs that are standing in my way. It consisted of TWENTY ONE modules! While Saint Sovereign and Fire made clear that the maximal upper limit is 20, I refused to listen. I carefully planned all modules over weeks so that all modules enhance each other and are deliberately aligned with my goals. With that level of introspection beforehand, I thought, “nothing can go wrong”. I ended up creating a monster subliminal, so dense like I have never seen before.

The first loop introduced me to what is coming. I went outside when I got hit with an unprecedented feeling of euphoria. The sun was shining, colors looked more saturated and I felt like a king walking around in paradise. I thought it could not get any better…
Back inside, I lay down in my bed, play two more loops, and continue to watch the Netflix series “The Order”. One episode followed another one, and I literally started and finished the whole series in one fucking day. Never happened before in my life. While at this point it should have been clear that something’s up and that reconcilation is hitting me hard, I DID NOT NOTICE IT. Furthermore, I got the following messages from SaintSovereign. 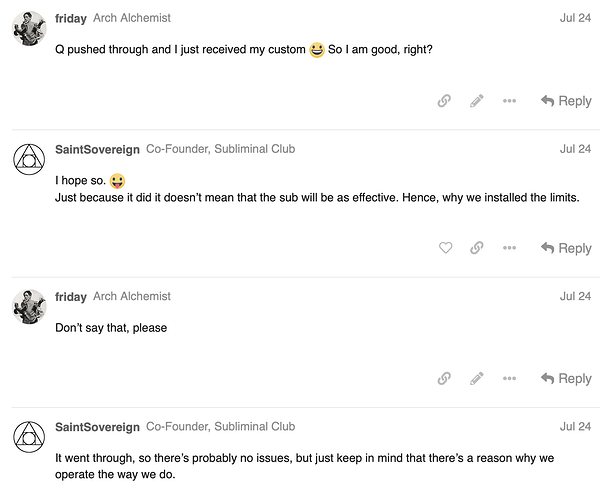 My recon brain took these messages and flooded my brain with thoughts of “This sub isn’t working, it got rendered useless” AND “You put so much thought into it and now you fucked up by ordering one more module”. In the beginning, I did not pay much attention to these. Especially, as I began to experience moments of exceptional bliss, where modules like Gratitude Embodiment, Ego Adsum, Blue Skies/Spiritual Freedom, Joy the Vivre strongly kicked in. However, while I got distracted by these beautiful moments the reconcilation was building up behind a veil. Even though I was having severe reconcilation at that point, I did not feel like it. The reconcilation felt smooth and slightly even though it was extreme in reality. Over the days, these moments of joy disappeared and got replaced and I began to feel increasingly more sluggish, emotionless, tired, and depressed. Like the life got sucked out of me. But the transition was so smooth that I did not realize what came over me. I just accepted that state of being me right now without realizing that it was very different a few days ago.

I would add power unleashed also.

Easy express of your power, If you have alot of power but dont know how to express it this will help.
I know i will add it in mine custom next.

Maybe rogue also, but i know it adds up fast, too many modules.
If you going for a small custom, get whats most important for you ofc.

But it seems like a good custom, good motivation, happy , some boosters, and healing, I wonder how the New beginnings will work?

Glad to see your update, can’t wait to read the rest of the story! So if I got it right, the “feel good” modules in your custom made the reconciliation “numbed” until you figured out something was wrong, or you did not feel comfortable with it anymore?

Glad to see your update, can’t wait to read the rest of the story! So if I got it right, the “feel good” modules in your custom made the reconciliation “numbed” until you figured out something was wrong, or you did not feel comfortable with it anymore?

You thought the title of this thread was just coincidence?

This sub will turn me into a fucking superhuman! More details coming

Currently carefully evaluating and planning my next moves. The next days will determine the next months.
When my custom arrives, I will launch full in action mode.

You mentioned running Tesla Q–what is that?
Or is that the new custom your getting?