A Dream fueled by MET2, Rebirth Sanguine and The Elixir

THE SETUP: Last night I had signed up for 2 hours of OT but the last call I got was 15 minutes before the end of my OT shift…and that call resulted in me working an extra hour and 20 minutes past the end of shift.

I had previously told my dad before that OT shift that I’d call him after to catch up.
I used to own a blue 2000 Chevy Venture minivan (Ownership of these is NOT recommended

)
Here begins the dream report I originally typed up for a friend:

So last night I’d sent dad a message saying I’d call him after 10 his time since I was doing 2 hours of OT.

Well, as you know, that shift ended late, so I texted him before bed last night to say I’d call him after work tomorrow (today…Monday now lol)

Went to sleep with that the stack of Mind’s Eye (Terminus Squared Strength), The Elixir, and Rebirth Ultima.

THE DREAM:
Dreamed that my aunt and Uncle were moving to Colorado and wanted to take me out to dinner before they left, in “Seattle”.

My aunt and uncle picked me up in my minivan (the blue one I used to have).

I’m letting them drive the van. so I sit in the back passenger seat.

I hear this awful wind noise which I’d apparently always taken for granted in the dream reality…I look at the passenger side sliding door and realize there’s a rubber seal that goes around the window…and the seal was loose in parts.

So I reach over and push/pack the rubber seal back in the loose places…and suddenly it’s near-quiet in there…and I was like “So THAT’S all that was making that noise? I guess I just got used to it.”

I show up at the place we’re supposed to meet for dinner…it’s a “fun night” type of thing being done in a restaurant.

Like where they had different booths of fun stuff and games to do. We used to call it “fun night” when I was a kid. Aunt and Uncle go off to see other stuff in the “fun night”.

I’m standing in a line for what seems like ever. get up to the front and there’a little coin-operated machine to get a “prize” out of. The girl manning the machine gives me 3 coins…I think a quarter and 2 dimes, or 2 quarters and a dime.
I put it in, and it opens up and she pulls a cardboard box out, and I ask “What do I do with this?”

She said “Just pick your prize. Whatever you want.”

I find a few semi-decent things…but the one I picked out is a small fold-out booklet/brochure talking about the Kingston Trio.

Talking about their music, the group’s history, info about some of their more famous songs.

I put that in my pocket, then wander outside.

I suddenly realize that we never actually had dinner.

I go back in, and the"fun night" shit’s all gone…it’s just a restaurant, and all the “fun night” stuff is just gone…it’s back to regular tables layout.

I leave again, and am wandering around “Seattle” and it’s suddenly late at night.

I wandered for a while, then call my dad since I realized I didn’t make it back home to call him.

Told him I was wandering in Seattle. Took pics of some very large buildings I saw…sent them to him…said “Look how big that fucking building is!”

Then as I’m walking more, I tell him about how I fixed the wind noise problem in the van.

Anyway, I send a text message to someone to come get me. not sure if it’s my Aunt or (wife’s name)…fuzzy on that…told them I’m by the “BIG I Interchange” (Big I is the name given to the big stacked interchange in Albuquerque. Where I-40 and I-25 cross each other)

So I end up sitting on a very high bridge type thing…where traffic can’t hurt me. Just waiting for (whoever) to come to get me.

As I’m sitting on the bridge/ledge thing…there are other people sitting with me also waiting for (whatever they’re waiting for).

I’m looking at the highway far down below and I’m amazed the traffic is still so heavy at 2 am-3 am even for “Seattle”.

I then wonder what would happen if I drop my backpack down if it would damage cars as they speed by. I figure the distance is probably 500 feet drop or more.

I decided that wouldn’t be nice to do.

suddenly I have the thought that it would be a simple easy matter to just slide myself forward and “see what’s on the other side”. Mind you, I’ve never been suicidal. Not bragging or anything like that. I’ve just never gotten to the point where I’ve really considered doing that.

Even in the dream, I wasn’t suicidal/despondent… I just was filled with curiosity as to “what comes next? Is there anything after?” Similar to David in the final scenes of “Vanilla Sky.”

I decide NOT to do it since someone is coming to get me and take me home…partially…but mostly I don’t do it because I realized that’s an experiment I could only run once and if there isn’t anything after, then I’d have wasted my potential future “here”. ¯_(ツ)_/¯

I wake up at this point. 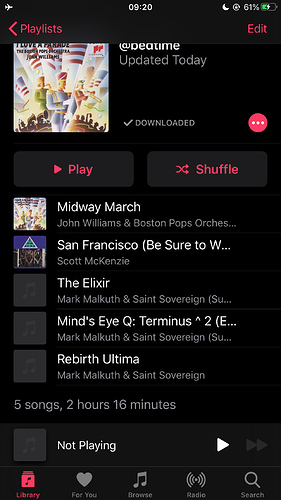 That is a very trippy ending to the dream! I can see how the subs in your playlist could have contributed to that for sure.

I was wondering if that wind noise may have been a counterpart to the noise of the masked track.

Good callout. I never once made that connection! Entirely possible. I had a dream once where I was in a large room with banks of computer racks. Likely connected blade servers or something…and they were all beeping a weird alarm.

It sounded more and more familiar until suddenly it was VERY familiar as I was laying in bed, eyes-open. It was my alarm to get up to go to work